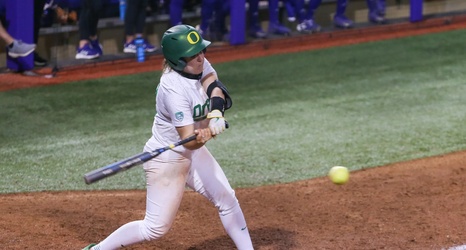 The Oregon Ducks ended their season today in losing their second match against the regional host, the #4 Arkansas Razorbacks.

Stevie Hansen took the circle for the Ducks and lasted for 2.1 innings before being relieved by Makenna Kliethermes. In spite of giving up a few early runs in the first four innings, the Ducks tied the game 3-3 in the bottom of the fourth off an Ariel Carlson in-field home run.

Unfortunately, Arkansas would scorch Oregon for six runs in the sixth inning, taking a 9-3 lead that the Ducks could not surmount, and that would be our final score in Fayetteville.