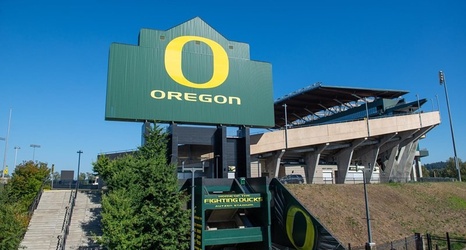 This September, Oregon athletics will mark 20 years since the debut of the now-iconic "O" logo that has made the University of Oregon an international brand. The logo was unveiled on Dec. 23, 1998, when the Ducks in coordination with Nike introduced new uniforms, school colors and the logo during the week leading up to the football team's Aloha Bowl appearance. But its genesis was more than two years earlier, in the wake of the 1995 UO football team's Cotton Bowl appearance. For UO alum and Nike CEO Phil Knight, it was the first game in which his alma mater was outfitted in uniforms supplied by the company he co-founded – but also it was the Ducks' second straight loss in a New Year's Day bowl game.