On the eve of the NCATA championships, three Ducks named All-America 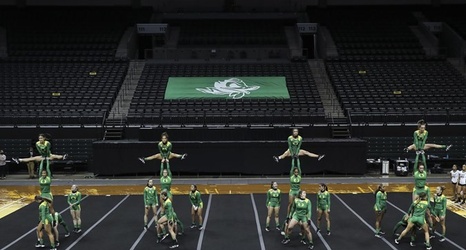 EUGENE, Ore. – With less than 24 hours until rivals Oregon and Baylor meet for the third time this season in the National Collegiate Acrobatics & Tumbling Association National Championship, Payton Coon, Alyssa Hew and Addie Lacewell have been named to the 2021 NCATA All-American Team.

The Ducks join Azusa Pacific and Baylor with a team-high three All-American selections. Lacewell, a senior from Naperville, Ill., and Coon, a graduate student from Portland, both were selected to the team for the second time. Hew, a junior from Markham, Ontario, Canada, claimed her first All-American honor.