Matthews named player of the week by collegiate slugger award 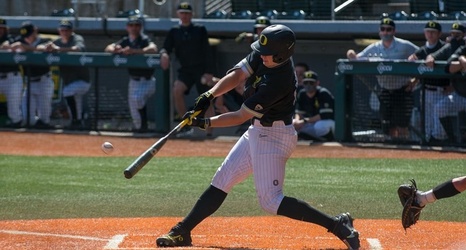 EUGENE, Ore. – A week after being named the Pac-12 Conference Player of the Week, the Bobby Bragan Collegiate Slugger Award named Gabe Matthews its player of the week.

For the second week in a row, Matthews hit over .600 going 10-for-15 and leading the award's watch list with 10 hits and eight runs scored. Matthews had multiple hits in all four games during the week and drove in six runs. He had two doubles and a triple, while walking twice and striking out just once with a pair of hit-by-pitches.