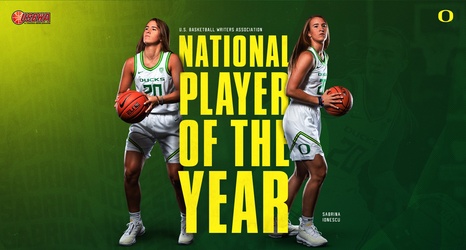 EUGENE, Ore. – Sabrina Ionescu continued her dominance of the national end-of-season awards on Wednesday as she was named national player of the year by the United States Basketball Writers Association (USBWA).

Ionescu is the first Duck ever to win USBWA national player of the year, which is officially dubbed the Ann Meyers Drysdale Award.

"Sabrina Ionescu is one of the most well-rounded players on both ends of the floor. Her leadership on and off the court stands out, and her ability to make everyone around her better sets her apart," said the award's namesake, Ann Meyers Drysdale, in the USBWA release.