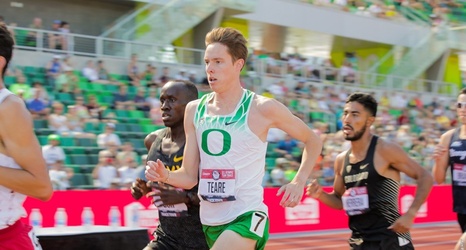 EUGENE, Ore. – Already a national champion among the collegiate ranks, Cole Hocker has added a U.S. title to his résumé.

Hocker, who won NCAA titles indoors over a mile and outdoors in the 1,500, won the final of the men's 1,500 at the U.S. Olympic Team Trials at Hayward Field on Sunday. The sophomore from Indianapolis outkicked defending Olympic champion and UO alum Matt Centrowitz to claim the title, and put himself in position to represent the United States at the Summer Olympics in Tokyo later this year.

At least five Ducks will be on Team USA in Tokyo, with Centrowitz and Raevyn Rogers earning spots Sunday, a day after Devon Allen and Jenna Prandini did so; Galen Rupp earlier had qualified in the marathon.