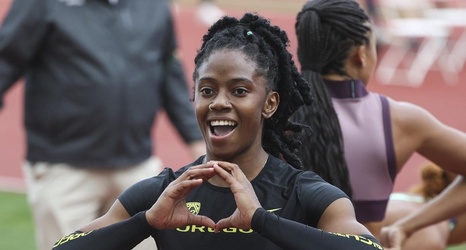 Ducks past and present helped introduce new Hayward Field to a wider audience Saturday afternoon, during a nationally televised broadcast of the USATF Grand Prix that capped the two-day Oregon Relays.

Alumni including Raevyn Rogers, Jenna Prandini, Phyllis Francis, Cravon Gillespie and Eric Jenkons were on hand to compete, and several current Ducks ran during the Grand Prix portion of the meet. Charlie Hunter just missed the Olympic 'A' standard when he ran 1:47.21 in the 800, Luis Peralta won a section of the 800 specifically for collegians in 1:49.25, and Kemba Nelson took fifth in the 100 in 11.