Football: Dillingham has taken Oregon’s offense out of neutral 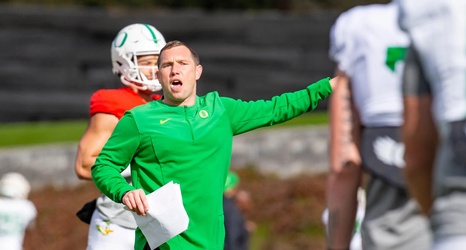 Offense. It’s what Oregon Football had become synonymous with since the mid-2000s when then head coach Mike Bellotti decided to institute the spread-option and instantly took the conference by storm, improving from 5-6 to 10-1 with essentially the same team but a new scheme.

Two years later he brought in Chip Kelly to put the offense in turbo-drive and once Kelly stepped into the head coach position himself Oregon was averaging over 40 points per contest and making hitting the half century mark a regular occurrence.

Mario Cristobal, who coached Oregon Football for four seasons before departing for Miami, had a different mindset, preferring to play a more smashmouth style that focused on wearing opponents down al la Stanford for the last decade or so.