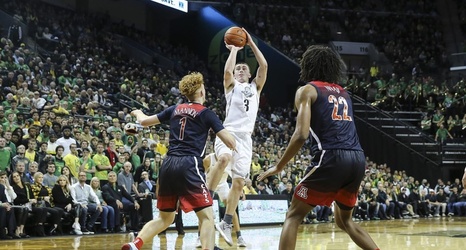 EUGENE, Ore. — Sophomore sixth man Will Richardson scored seven of Oregon's eight points in overtime Thursday, including the game-winning basket with 15 seconds left in the extra period as the No. 9 Ducks held off the No. 24 Wildcats, 74-73, before 10,113 fans in Matthew Knight Arena.

Richardson stepped through the post defense for a layin that tied overtime 68-68, and completed a three-point play on the next possession for a 71-68 lead. Arizona scored off a turnover to lead 73-72 with 21 seconds left, but Richardson scored again at the other end, and the Ducks got a stop on defense to win their fourth straight over the Wildcats.