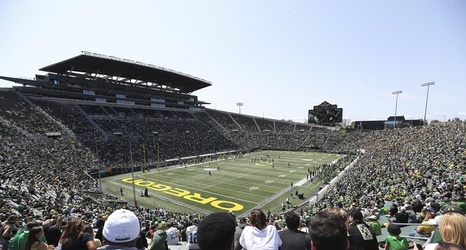 EUGENE, Ore. — The curtain was raised on the Dan Lanning era of Oregon football Saturday, and what a show the Ducks put on for their fans.

Three UO quarterbacks combined for five touchdown passes in the annual Spring Game, three of which were longer than 30 yards, while the defense forced five turnovers. If explosive plays and takeaways are the biggest X-factors in college football today, as Lanning said afterward, the Ducks provided a hopeful prelude Saturday to the upcoming 2022 season.

And they did so with scores of alumni on the sidelines, and tens of thousands of fans in the stands at Autzen Stadium.