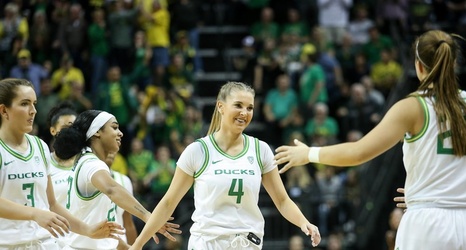 EUGENE, Ore. — An Arizona State team determined to turn Sunday's game at Oregon into a physical slog was instead drowned in a three-point barrage by the No. 3 Ducks, who made 13-of-25 three-pointers in a 79-48 victory before a sellout crowd of 12,364 in Matthew Knight Arena.

The UO women (22-2, 11-1 Pac-12) avenged their only conference loss of the season by enduring ASU's grinding style, which saw the first quarter end with Oregon up just 10-2. The physicality led to three technical fouls in the game — including one each on UO coach Kelly Graves and senior star Sabrina Ionescu — but ultimately the Ducks turned it into a blowout with their three-point shooting.