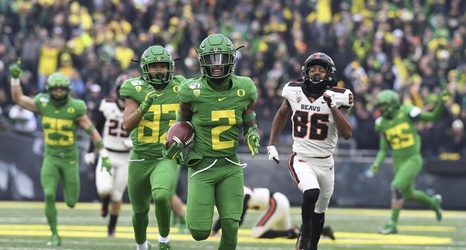 EUGENE, Ore. — Oregon has a 10-win season and is looking for more in next week's Pac-12 Championship game after beating Oregon State in the Civil War before 56,243 fans in Autzen Stadium on Saturday, 24-10.

On a bitterly cold afternoon, Oregon's offense only caught fire a couple of times. But that plus a kickoff return TD by Mykael Wright was enough to support a bounceback effort by the UO defense, in the last Autzen Stadium appearance for a UO senior class including the likes of Justin Herbert, Troy Dye, Shane Lemieux and Calvin Throckmorton.