As Wins Mount For Pritchard, Family Has Front-Row Seat 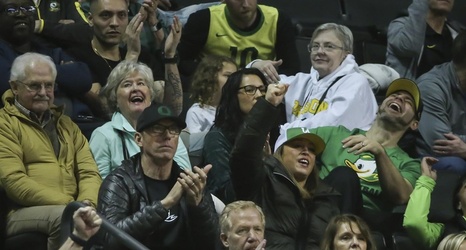 On Saturday night in Matthew Knight Arena, Melissa Pritchard had barely settled into her seat before she was right back on her feet.

Melissa and her husband, Terry, had made the 90-minute drive from West Linn to watch their son, Payton, in action with the Oregon men's basketball team. After starting the evening with dinner at the Wild Duck Cafe, across the street from the arena, the Pritchards took their normal seats in Section 106 to watch Payton and the Ducks take on Arizona State.

Terry is an Oklahoma native with an understated, Midwestern demeanor. Melissa, who attended high school in Portland, is more exuberant, and she was cheering wildly one possession into Saturday's game, which Payton opened with a three-pointer.