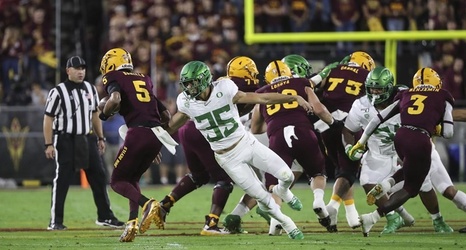 EUGENE, Ore. — A week after seeing their College Football Playoff dreams take a hit, the Oregon football team will look to get back on track Saturday when the No. 14 Ducks host the Civil War in Autzen Stadium at 1 p.m.

Oregon (9-2, 7-1 Pac-12) has a chance to re-establish momentum before playing next week in the Pac-12 Championship game. Oregon State (5-6, 4-4) can become bowl-eligible by upsetting the Ducks, which would require the Beavers' first win in Autzen Stadium since 2007.

The Pac-12 Network will televise the Civil War, with Ted Robinson providing play by play, Yogi Roth handling analysis in the booth and Jill Savage on the sidelines with reporting.