2020 Defense Will Have Senior Presence 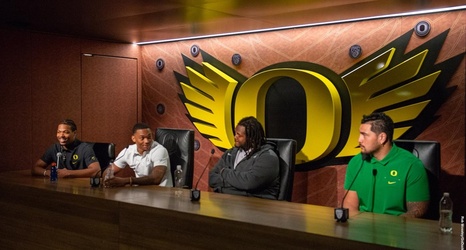 EUGENE, Ore. — From the back of the third-floor media room in the Hatfield-Dowlin Complex on Monday came a percussive clapping sound.

Media in attendance were on hand to hear four draft-eligible juniors from the 2019 Oregon football team announce that they all intended to remain in school for their senior seasons. As first Thomas Graham Jr. announced his decision, followed by Deommodore Lenoir, then Jordon Scott and finally Austin Faoliu, UO head coach Mario Cristobal let loose with a few claps.

"Don't mind me," Cristobal said with a smile.