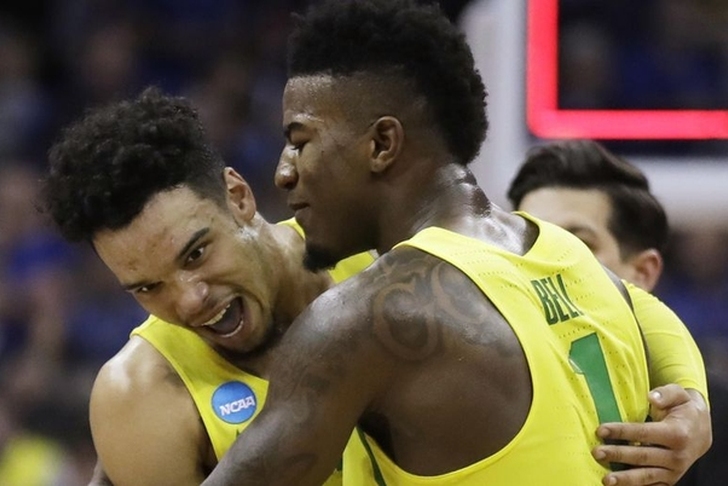 The Oregon Ducks won the first ever NCAA Tournament in 1939, but hadn't been back to the Final Four since.

That all changed on Saturday night, when Oregon played perhaps their best game of the season to grab a 74-60 win over the Kansas Jayhawks. The win also marks the first time any Pac-12 team has made the Final Four since 2008.

Jordan Bell was all over the court for Oregon, and his defensive prowess proved to be one of the big differences in the game. He finished with eight blocks to go along with 11 points and 13 rebounds.

Tyler Dorsey also continued his hot tournament with 27 points, and Pac-12 Player of the Year Dillon Brooks finished with 17 to pace Oregon offensively.

The game was back-and-forth throughout most of the first half, but the Ducks went on a 17-7 spurt to close the first half and take a 44-33 lead into the halftime break.

Tyler Dorsey (@TDORSEY_1) banks in the DEEP three right before the halftime buzzer to give #Oregon a 44-33 lead at the break! #MarchMadness pic.twitter.com/Inwot5tcX5

Oregon was able to push their lead to as many as 18 points early in the second half, and Kansas was able to cut the deficit to six with 2:49 remaining. However, Dorsey hit a dagger three on the ensuing possession to regain control for the Ducks.

Kansas' offensive struggles played a major role in this loss, as they shot just 35.0 percent from the field and 20.0 percent from three-point range. Furthermore, stars Josh Jackson and Devonte' Graham combined for just 13 points on 3/15 shooting.

Oregon will now play the winner of the South Region (North Carolina vs. Kentucky) in the Final Four next Saturday in Glendale, Arizona.

Follow our Oregon Ducks news page for all the latest Oregon basketball news!