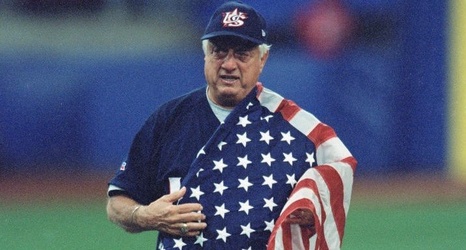 Tommy Lasorda, the only person to manage World Series and Olympic champion teams, has died at age 93, according to the Los Angeles Dodgers.

Lasorda guided the only U.S. baseball team to win an Olympic title at the 2000 Sydney Games, three years after being inducted into the National Baseball Hall of Fame.

Lasorda is best known for leading the Dodgers to World Series crowns in 1981 and 1988 while at the helm for 21 seasons.

In 2000, USA Baseball tapped the then-73-year-old to manage a rag-tag Olympic team, the first to include professional players but none on Major League Baseball active rosters.