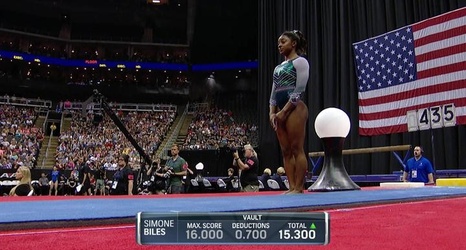 KANSAS CITY, Mo. — Simone Biles didn’t start the U.S. Gymnastics Championships as she would have liked. She finished the opening night in typical fashion — comfortably in first place.

“I’m just pissed off already,” she told her coaches after overcooking her first floor exercise tumbling pass, a triple twisting double somersault that no other woman has performed, and putting her hands down on the landing.

Biles, eyeing a record sixth U.S. all-around title, was in sixth place after that first rotation. As expected, she seized the lead after her second event — vault — and by the end of the night topped the field by 1.