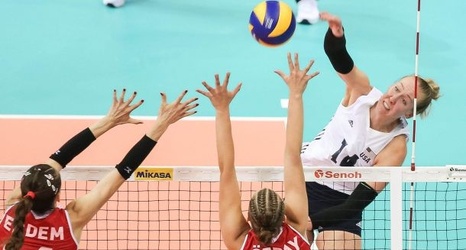 I tell Michelle Bartsch-Hackley as I rise at the end of our sitdown interview that I’m heading upstairs to ask her coach, Karch Kiraly, about her.

“He’s going to say, this girl is terrible. I almost cut her,” Bartsch-Hackley says without a laugh but, mostly, in jest.

Actually, Bartsch-Hackley was cut from the Olympic team. That’s just one hurdle the 6-foot-4 native of the horseradish capital of the world cleared to become an indispensable part of the U.S. volleyball team.

Bartsch-Hackley was named MVP of the premier summer tournament, the FIVB Nations League, and has the most powerful right arm on the 14-player roster for the quadrennial world championship that starts Saturday in Japan.