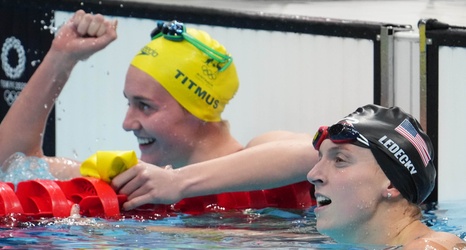 TOKYO — In one of the most anticipated events of the Tokyo Olympics, American swimming standout Katie Ledecky lost to her Australian rival Ariarne Titmus by .67 of a second in the women’s 400-meter freestyle.

Titmus won gold in 3:56.69, the first Olympic medal for the 20-year-old who surged past Ledecky in the last 50 meters. Li Bingjie of China won bronze.

"I think I flipped at the 300 and saw she was right there and it was going to be a fight to the finish. I fought tooth and nail," Ledecky told NBC's Michele Tafoya after the race.