Is Chase Budinger the Future of Men’s Beach Volleyball? 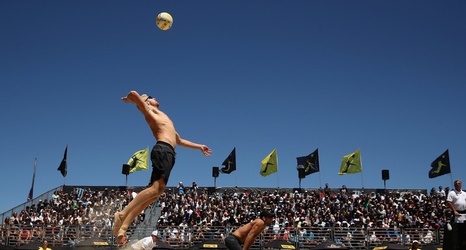 At the 2012 N.B.A. slam dunk contest, Chase Budinger ran up behind Diddy, intercepted his upward toss, launched his 6-foot-7 frame over the rapper’s head, and smashed the ball into the net in one swoop.

Now the seven-year N.B.A. veteran is making a compelling encore.

Not on the hardwood, where he earned more than $18 million playing small forward for Houston, Minnesota, Indiana and Phoenix. And not on the indoor volleyball court where he was the national high school player of the year in 2006.

Instead, Budinger has spent the last two years establishing himself as a serious contender in professional beach volleyball.