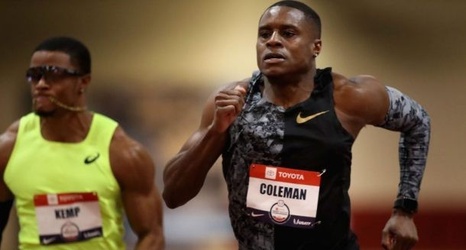 Christian Coleman overcame an average start to nearly break his 60m world record at the USATF Indoor Championships, a signal that the Olympic 100m favorite is in form to start the season.

Coleman clocked 6.37 seconds, matching the second-fastest time in history behind his world record 6.34 from 2018.

“I thought I had a shot at the record,” Coleman told Lewis Johnson on NBC. “We haven’t done a whole lot of speed work [in training], so I’m pretty satisfied.”

Coleman now has the four fastest times in history. He beat a field at nationals in Albuquerque that did not include Olympic 100m contenders Noah Lyles and Justin Gatlin, who did not race the indoor season.