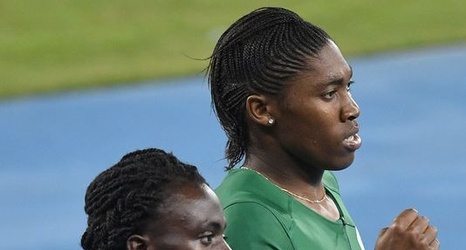 RIO DE JANEIRO (AP) — It was predicted. That didn't make it any less impressive, or any less contentious.

Caster Semenya won the Olympic title in the 800 meters Saturday with no one close to challenging her, a result that will only stoke the complex debate over whether women with much higher levels of testosterone than normal should be allowed to compete unchecked.

Semenya of South Africa won her first Olympic gold in a personal-best of 1 minute 55.28 seconds, a national record and one of the top 20 times ever in the two-lap race.

Burundi's Francine Niyonsaba took silver over a second behind the dominant Semenya, with Kenya's Margaret Wambui collecting the bronze in an all-African podium.