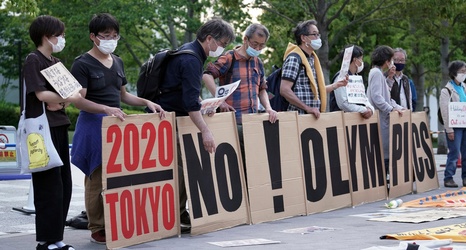 An anti-Olympics protester posed as a reporter and interrupted a news conference hosted by the International Olympic Committee on Wednesday.

The man, who portrayed himself as "David O'Brien from Yahoo," obtained access to the virtual news conference with IOC spokesperson Mark Adams following an executive board meeting.

When given the floor to ask a question, the man appeared on camera holding a black banner or scarf that read "No Olympics in Tokyo 2020."