The 5 Most Embarrassing Moments In Olympic History 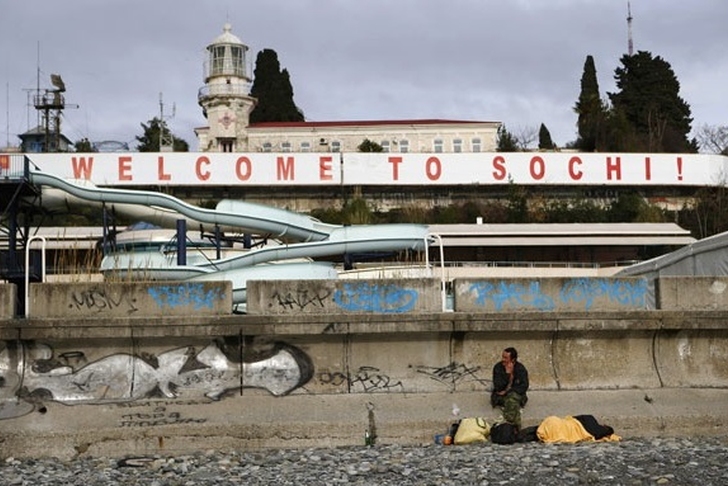 If you've turned on a computer or a television in the past week, you've probably heard that the Sochi games haven't exactly gone off without a hitch. With tap water the same color as the medals being awarded, wild dogs wandering through events and hotels last cleaned before the fall of communism, things have been pretty embarrassing for the event organizers and the Russian public. Is Sochi as bad as it gets, though? We took a look back through Olympic history to pick out the most embarrassing moments...and oh man, it gets pretty bad:

While there have been plenty of embarrassing moments in Sochi so far, but none summed up the games quite like this image from the opening ceremony:

When one of the Olympic rings failed to open, Russian broadcasts managed to avoid showing the image thanks to tape delay. International media outlets weren't so kind, and the picture quickly became a symbol of everything that's gone wrong in Sochi so far.

4. Eric Moussambani goes for a swim

Equatorial Guinean Eric Moussambani learned how to swim just eight months before competing in the 100m freestyle at the 2000 Sydney Olympics. A benefactor of an experimental wild card draw that let competitors enter the Olympics without meeting minimum qualification requirements, Moussambani ended up the only swimmer in his heat after the other two were disqualified.

Moussambani ended up getting a standing ovation from the capacity crowd, and while his Olympic adventure didn't win him any medals, it was uplifting and inspiring for everyone involved. "Eric the Eel" was a fantastic sport about the whole thing, and he managed to set a new personal best and a new national record for his home country.

3. Lindsey Jacobellis shows off, then gets shown up

American snowboarder Lindsey Jacobellis made it all the way to the gold medal round in the 2006 Snowboard Cross event. With a three-second lead going into the final jump, Jacobellis showed off, going for a method grab, but then got struck down by instant karma:

North Korea's womens soccer team was set to take on Colombia during the 2012 London games, but when the North Koreans took the field, they saw something on the jumbotron that made them march straight back to the locker room.

The flag on the monitor? Yeah, that's South Korea, and the North Koreans haven't been too fond of their neighbors since the war that split the Korean peninsula in half. The North Korean women's soccer team only took the field after an official apology was made and the head of their soccer federation (Kim Jong-Un, of course) gave them the all-clear.

The opening ceremony for the 1988 Seoul Olympics featured the release of dozens of peace doves. The doves sadly decided to watch the rest of the ceremony while perched on the giant Olympic torch...which was then lit at the conclusion of the ceremony.

Animal rights activists were not amused by the impromptu barbecue, and doves haven't been featured in an opening ceremony since.

GALLERY: Sochi Doesn't Look As Bad As Everyone Makes It Out To Be - It Looks Much, Much Worse