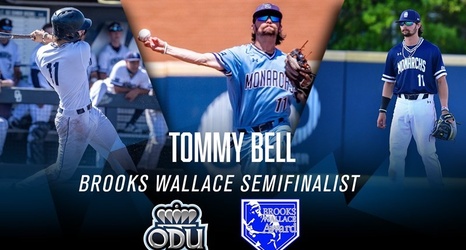 LUBBOCK, Texas – Old Dominion University shortstop Tommy Bell was named a semifinalist for the Brooks Wallace Award, given to the nation's best shortstop, the College Baseball Foundation announced on Tuesday.

The award, sponsored by Mizuno, honors the nation's top shortstop and will be presented this summer by the College Baseball Foundation. It is named for former Texas Tech shortstop Brooks Wallace, a slick-fielding shortstop who played for the Red Raiders to from 1977 to 1980.

Bell is hitting .333 on the year with five homers, eight doubles, four triples and 37 RBI's. He has a fielding percentage of .