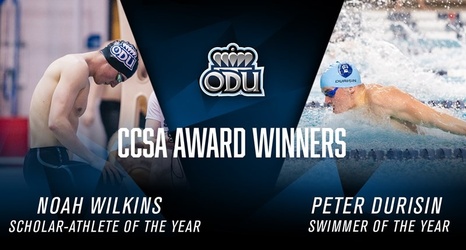 LYNCHBURG, Va. – Old Dominion swimmer Peter Durisin was named the Coastal Collegiate Swimming Association (CCSA) Swimmer of the Year, and Noah Wilkins was named the Scholar-Athlete of the Year, the league announced on Friday. The winners are selected by a vote taken by the league's head coaches.

Durisin capped his senior season at Old Dominion by winning the 100 and 200 breaststroke at the CCSA Championships, and helping ODU to a second place finish in the 200 medley relay. A year after finishing second in the 100 breaststroke, Durisin won the event with a time of 54.