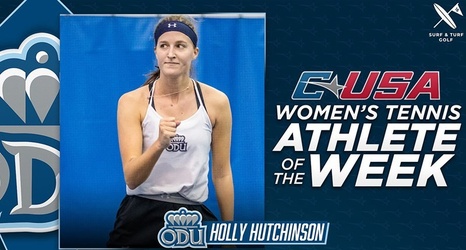 NORFOLK, Va. – Holly Hutchinson of the Old Dominion women's tennis team was named the Conference USA Athlete of the Week presented by Surf & Turf Golf, as announced by league officials on Wednesday afternoon. Hutchinson (Middlesex, England) has now earned the league's weekly award a total of 10 times throughout her collegiate career.

Hutchinson clinched the match for then No. 40 Old Dominion over No. 26 nationally ranked Wake Forest in Winston-Salem, North Carolina by a 4-1 score. After dropping the second set, Hutchinson roared back in the third to win her match 6-4, 1-6, 6-3.