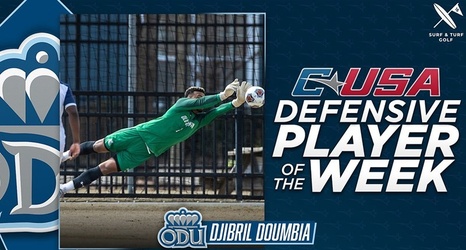 NORFOLK, Va. – Djibril Doumbia of the Old Dominion men's soccer team was named the Conference USA Defensive Player of the Week on Tuesday afternoon, as announced by league officials. All 2021 C-USA Men's Soccer Player of the Week honors are presented by Surf & Turf Golf.

Doumbia earned his second C-USA Defensive Player of the Week this season after he made nine saves and faced 21 total shots (10 on goal) in a 1-1 double-overtime draw at No. 8 Marshall on March 27. The Monarchs played the final 23 minutes with 10 men, but the sophomore from Boulder, Colorado was up to the task with a pair of saves in the first overtime to preserve the tie.