Stadium scene: Sights from the student section during the Cowboys victory 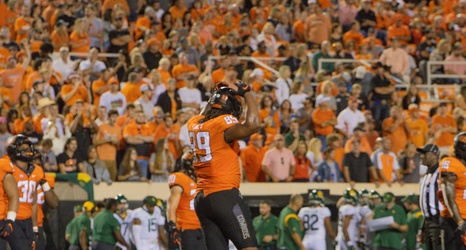 The Oklahoma State Cowboys took on the Baylor Bears Saturday in the first top 25 matchup for the Cowboys and Poke Faithful was getting rowdy from the start.

Before kickoff had even started a tribute for the 2011 Cowboy football team was shown with former players such as Brandon Weeden and Justin Blackmon in attendance which got the OSU crowd pumped up for the matchup against Baylor.

There were some interesting sites to be seen this week. There was one Cowboy fan wearing nothing but overalls, boots and a cowboy hat as he cheered on the Cowboys.