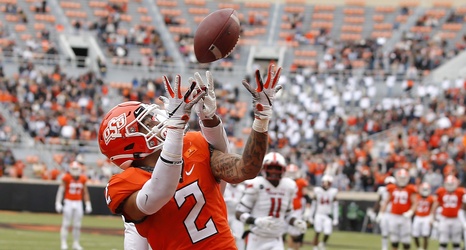 The Big 12 announced its all-conference teams Thursday, where seven Cowboys made the first or second team.

Tylan Wallace and Teven Jenkins each made the All-Big 12 first team.

Wallace was a second-team selection as a junior in 2019 despite missing the Cowboys’ final four conference games with an ACL tear. He made the first team as a sophomore in 2018.

In his senior season, Wallace has a Big 12-leading 877 receiving yards on 53 catches. He has also played in just eight games (not including the hands team showing against Kansas State).