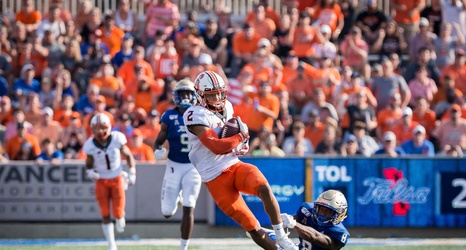 Dillon Stoner climbed up some lists, as well.

There isn’t a position group that Oklahoma State has been more historically dominant at than it has at wide receiver.

Another Cowboy great was off to the NFL when the Baltimore Ravens took Tylan Wallace in the fourth round of this past weekend’s NFL Draft. The Pokes also lost another guy who didn’t get enough credit for his time in Stillwater in Dillon Stoner, who signed with the Las Vegas Raiders.

As we did with OSU’s rushing records earlier this week, let’s take a look at OSU’s career receiving lists in a post Wallace and Stoner world.