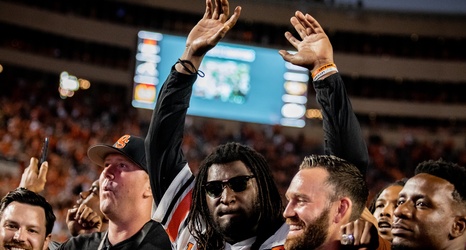 During halftime of Oklahoma State’s Week 5 game with Baylor, the school honored its 2011 football team. In the 10-year anniversary their 12-1 run and Big 12 title, some of the biggest stars from that team were on hand, including Brandon Weeden and two-time Biletnikoff winner Justin Blackmon.

The latter even hooked up for one final TD pass-and-catch in Boone Pickens Stadium. We’ll try to secure video evidence of that display, but for now enjoy this video released by OSU, followed by some former Cowboys enjoying their return to Stilly.

Lane Taylor was in Stilly in spirit.