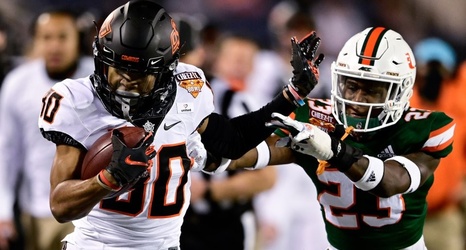 ORLANDO, Fla. — Oklahoma State linebacker Malcolm Rodriguez had a fist in the air before his body had even come to a stop during the game-clinching fourth-down tackle.

Then he hopped to his feet with a scream.

Bigger celebrations were to come after No. 21 OSU’s 37-34 victory over No. 18 Miami on Tuesday night in the Cheez-It Bowl at Camping World Stadium.

The Cowboy defense came up with two big stops to seal the victory, but the show belonged to true freshman receiver Brennan Presley.

The rookie from Bixby entered the game with one reception on the season, but had six catches for 118 yards and, most importantly, three touchdowns — including the deciding score.