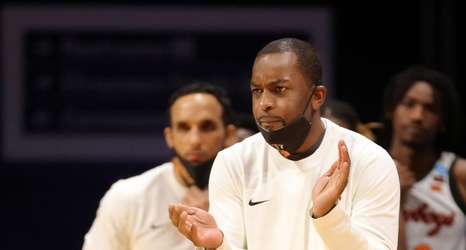 INDIANAPOLIS, INDIANA - MARCH 21: Head coach Mike Boynton of the Oklahoma State Cowboys reacts as they take on the Oregon State Beavers during the second half in the second round game of the 2021 NCAA Men's Basketball Tournament at Hinkle Fieldhouse on March 21, 2021 in Indianapolis, Indiana. (Photo by Gregory Shamus/Getty Images)

Oklahoma State basketball fans can be forgiven if they were slightly skeptical of the recent announcement about head coach Mike Boynton and the seven-year contract extension, designed to keep the 39-year-old in Stillwater through the 2027-28 season.