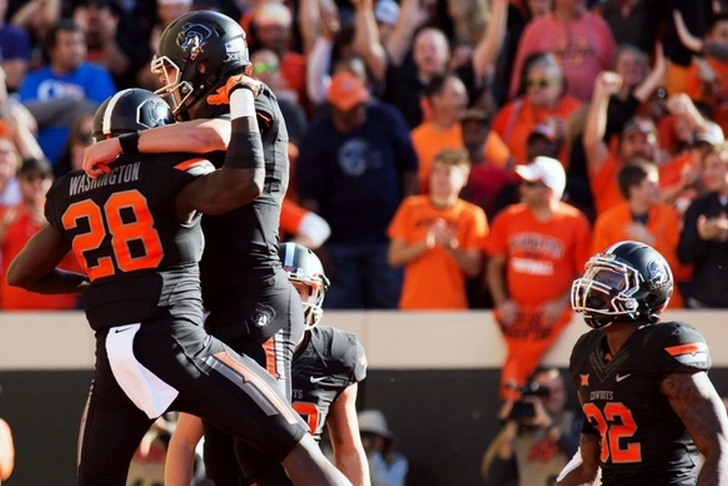 The West Virginia Mountaineers had emerged as one of the favorites to win the Big 12 thanks to a perfect 6-0 start to the season that had them ranked #10 in the country, but all of that came crashing down in Stillwater on Saturday.

The Oklahoma State Cowboys took control of the game in the second quarter and never gave it back, holding on for the 37-20 upset win over the Mountaineers. It marks the fifth time in six years at Oklahoma State has upset a top-10 team.

Each team started with a field goal on the opening drive, but West Virginia looked like they might start separating themselves when a 19-yard touchdown pass from Skyler Howard to Shelton Gibson game them a 10-6 lead. However, Oklahoma State closed the half by scoring two straight touchdowns to take a 20-10 lead into the break, capped by this three-yard pass from Mason Rudolph to Jalen McCleskey:

WVU looked like they were on their way to cutting into the lead late in the third quarter, but Ramon Richards intercepted a tipped pass and returned it to the nine-yard line:

Rudolph then rushed it into the end zone to end the drive with a touchdown, giving the Cowboys a 27-10 lead.

West Virginia responded with 10 unanswered points to make it a one-possession game, but Oklahoma State scored 10 points of their own to put the game away and preserve the victory.

Rudolph finished the game with 273 yards passing with three touchdowns and no interceptions, while star wide receiver James Washington had six catches for 117 yards.

Howard, who had been the star of WVU's undefeated start, passed for 212 yards with one touchdown and two interceptions.

Both teams are now 3-1 in Big 12 play, trailing undefeated Baylor and Oklahoma in the conference standings.