Why Oklahoma Will Make The College Football Playoff This Season 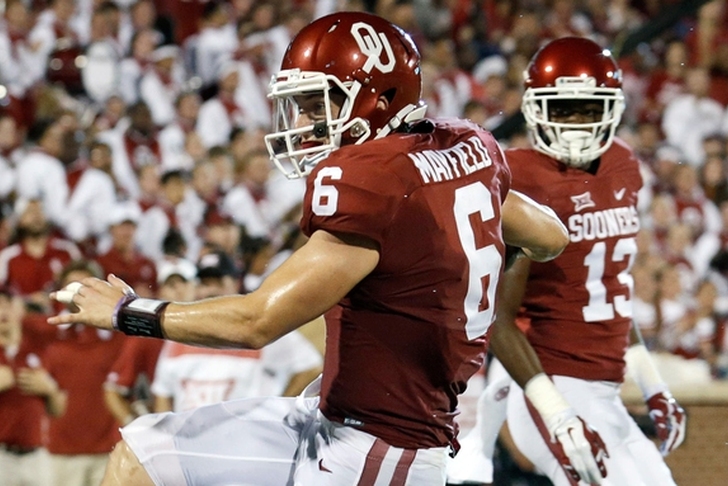 The Oklahoma Sooners made the College Football Playoff last season after winning the Big 12, and with plenty of star offensive players returning, they're expected to earn another bid in the playoff. Here are three reasons why they'll do just that:

3) Dominant rushing attack
Samaje Perine and Joe Mixon are perhaps the best running back tandem in the country, combining for 2,040 yards and 22 TDs last season. Perine is the bruising back to Mixon's quickness, proving to be an unstoppable thunder-and-lightning combination. Much was made of Oklahoma's successful switch to the spread offense, but their dominance in the running game allows them to still dictate the tempo and control every game they play in.

2) Weak Big 12
The Big 12 has been one of the best conferences in the country over the past few years, but most of the teams that have been dominant are going to take a step back this year. TCU won't be the same team without Trevone Boykin under center, Baylor lost virtually all of their key defensive players and Oklahoma State overachieved in the biggest way last year. Plus, the Sooners get both Baylor and Oklahoma State at home. It's hard to imagine anyone but Oklahoma winning the conference.

1) Baker Mayfield's greatness
Mayfield was the walk-on turned starter turned Heisman candidate, surpassing all of the expectations placed on him last season. He completed over 70 percent of his passes for a jaw-dropping 3,389 yards and 35 TDs with just five interceptions. He's also proven to be a dual-threat, racking up 420 yards and seven TDs on the ground.

He's only going to get better in his second full season as the starter in Norman. His dual-threat ability, combined smart decision making and incredible accuracy, will make him a Heisman favorite.