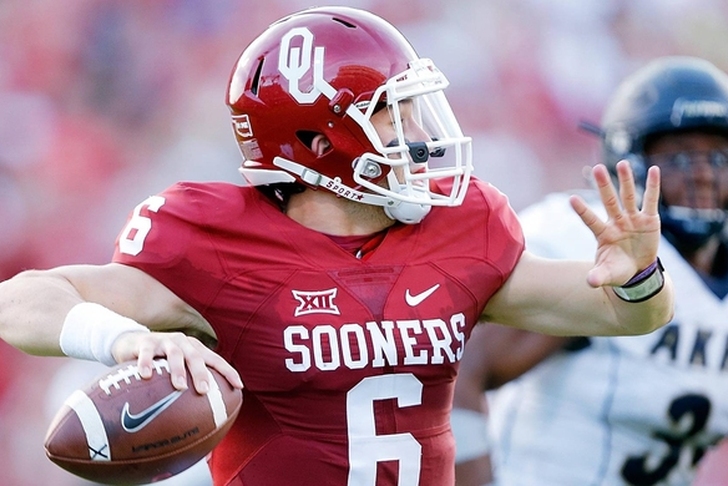 The Oklahoma Sooners are 9-1 and right in the middle of the race for a College Football Playoff spot. The CFP Rankings were released late Tuesday Night, and we're here to explain what the latest rankings mean for the Sooners.

The Sooners jumped to No. 7 in the latest CFP rankings, up from No. 12 the previous week. The Sooners made the big jump in large part because they beat Baylor, which was No. 6 the week before. In the process, the Sooners passed Florida. Utah, LSU and Stanford all lost, helping the Sooners rise. Ahead of OU are Iowa at No. 5 and Oklahoma State at No. 6.

The Sooners can jump Oklahoma State by beating their rivals when they play later this season. The Cowboys being ahead of the Sooners might actually be a good thing, because the committee should value OU's win over the Cowboys more. Two Big Ten teams are ahead of OU, and either Ohio State or Iowa will lose this season. When that happens, Oklahoma will move up. That would put OU in fifth and needing just a little bit of help to crack the top four.

The Texas loss hurt at the time and it still hurts. If Oklahoma and Notre Dame win out, the Sooners will have more quality wins. However, Notre Dame's only loss will have been to Clemson and Notre Dame crushed Texas at the start of the season. The committee picks and chooses when to value quality wins over quality losses, so it's unclear which way they'd vote if both teams finish the year with one loss. OU could really be bailed out if Notre Dame falls to Stanford in the final week of the season.

There's also the matter of TCU. The committee apparently has it out for the Horned Frogs, who checked in at No. 18 this week. They're the lowest one-loss Power 5 team. If OU beats TCU this week (and it should), the committee likely won't give the Sooners much credit for the win.

How The Sooners Can Get A Berth:

The Sooners path is very easy if they win out and Notre Dame falls to Stanford. The Pac-12 isn't going to get a berth, Clemson is all but locked in and the winner of the SEC and Big Ten should be in. That leaves a spot for Oklahoma to sneak in as the fourth team if the take the Big 12. They might jump Notre Dame if both teams win out, but there's no guarantee. There aren't many one-loss teams that can claim to have a better resume than the Sooners. Oklahoma could very well be this year's Ohio State.