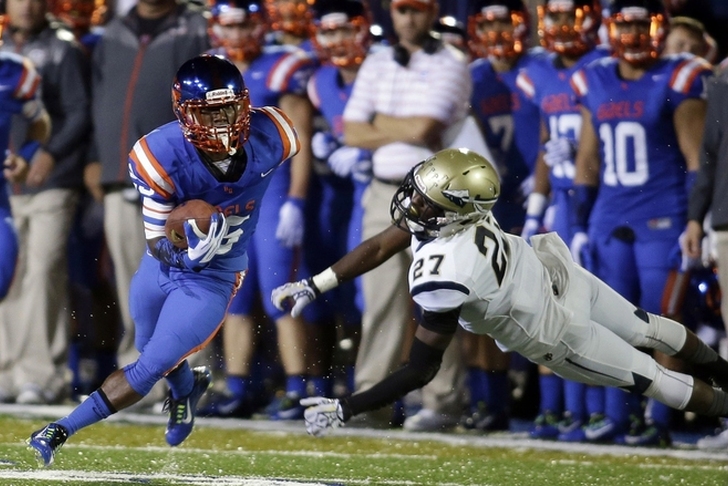 The Oklahoma Sooners are only a few weeks removed from National Signing Day, but the Sooners are already working on their 2017 recruiting class. The Sooners started their work on the 2017 before the 2016 class was finalized, but that's something every program in the nation does. The Sooners are hoping to land several highly-touted recruits this year.

Oklahoma and head coach Bob Stoops would love nothing more than to put together a class consisting entirely of top 50 recruits. But that's just not how recruiting works. OU may have offered a Top 10 recruit, but that doesn't mean they have a realistic shot at landing that player. The five names on this list are the highest rated recruits that have a shot at ending up in Norman next season. A big tip of the hat to 247Sports, as their composite rankings and Crystal Ball forecast were used. With that in mind, here are the 5 Highest Rated 2017 Recruits Oklahoma Could Actually Land.

We start with easily the best name on this list. Rambo hails from Texas and is the No. 20 player from the state. He's also the No. 20 WR in the class of 2017. He's attended two of OU's junior day, and the Sooners are the front-runners to land the four-star recruit.

Robinson has already committed to OU, but he still counts. While so much time until Signing Day, it's fairly common for kids to change their minds and decommit. That's the case for Robinson, who plans on heading to Texas' Junior Day later this month. Robinson is the No. 2 guard in the nation and the No. 11 recruit from Texas. OU is in the driver's seat, but it far too early to consider Robinson a guarantee.

Dobbins is technically an all-purpose back, but should be a RB at the college level who can contribute on returns and maybe in the slot. He's a four-star recruit and the No. 4 all-purpose back. He's the No. 6 player from Texas and this could end up battling a battle between Texas and Oklahoma.

Lindsey is a five-star recruit and the least likely player on this list to head to OU. But the Sooners at least have a shot to land Lindsey, who they offered in late January. The explosive, but undersized, WR is the No. 1 player from California. Nearly every program in the nation will be after. This might not remain the case, but it's fair to consider OU in the Top 5 for Lindsey at the moment. At the very least, they're in the Top 10.