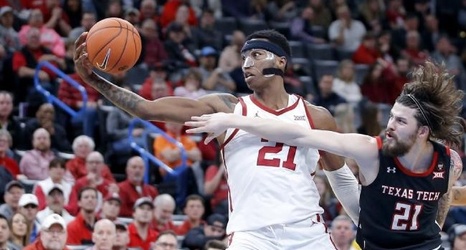 NORMAN — Kristian Doolittle didn’t know what playing would be like on Tuesday.

While playing with the face mask and only breathing out of one nostril might have been challenging, Doolittle finished Tuesday's game as the Sooners’ leading scorer. His 19 points helped OU beat No. 22-ranked Texas Tech 65-51 at Chesapeake Energy Arena.

“It affected me a little bit, but the hardest thing was just breathing,” Doolittle said. “I got taken out a few times because I was winded, but I was able to fight through that, especially in the second half, just being able to play a good game.