OU football: Sooners get off to a sluggish start before putting away Jayhawks 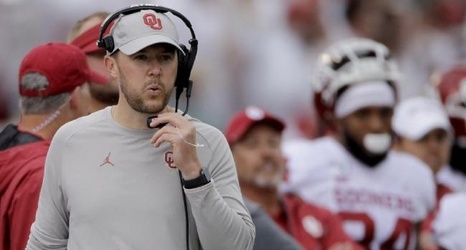 LAWRENCE, Kan. — In a room so crowded that Lincoln Riley’s wife, Caitlin, had to stand in front of the door to squeeze to watch his postgame press conference, a toilet flushed loudly.

“That’s what they thought of my play calls at the end of the half,” Riley joked.

It was the last bit of weirdness on a strange Saturday, where No. 6 Oklahoma got off to a slow start and showed a bit of a pre-Texas hangover in a 45-20 win over Kansas at Memorial Stadium.

Riley heaped a lot of the blame on himself, even before the flush, dismissing the notion that the Sooners had looked ahead to next week’s Cotton Bowl showdown with the Longhorns.