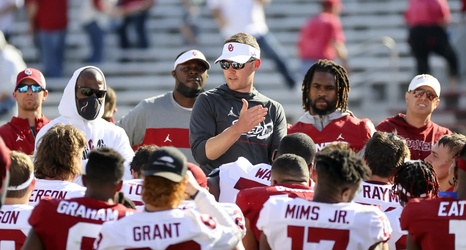 On a gorgeous Saturday afternoon, football returned to the Palace on the Prairie for the Oklahoma Sooners’ annual Red & White Spring Game. Despite facing a game-opening three score deficit, OU’s offense (white) would ultimately prevail over the Defense (red), winning 30-29.

While a pair of 15-minute halves doesn’t exactly provide a whole lot for fans to draw conclusions from, it was rather interesting to see how some of the newcomers could potentially contribute later this fall and throughout their Sooner careers.

As previously mentioned, OU’s offense began the spring game trailing its defense, 21-0, and for a while it appeared that the ‘D’ didn’t actually need the extra help with a solid first half performance.