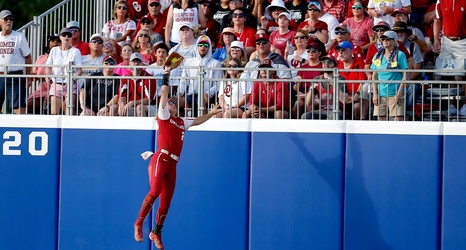 The beginning of Game 2 of the WCWS title series was not ideal for Patty Gasso and the Oklahoma Sooners. The Sooners were the away team for this matchup, and Texas was seemingly getting on base with relative ease on routine singles off of starter Jordy Bahl. Bahl surrendered two runs at the bottom of the first inning, but that doesn’t mean the theatrics for the Sooners didn’t start already. Jayda Coleman, an integral piece to this team and the best center fielder in softball had some pretty spectacular plays.

Actually, the Sooners’ bats may not have been on full display as they typically are, but the skills of OU defenders were apparent and impressive.