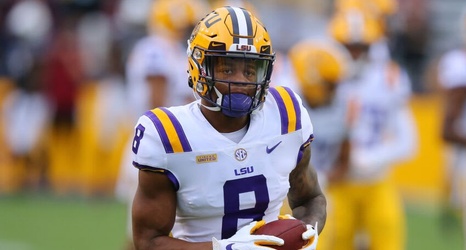 BATON ROUGE, LOUISIANA - OCTOBER 24: Tre Bradford #8 of the LSU Tigers in action against the South Carolina Gamecocks during a game at Tiger Stadium on October 24, 2020 in Baton Rouge, Louisiana. (Photo by Jonathan Bachman/Getty Images)

According to multiple reports, Oklahoma football has lost a second running back in the same week.

Tre Bradford, who came to OU from LSU via the transfer portal this past off season reportedly is longer on the Oklahoma roster. The OU Daily, the Oklahoma student newspaper, was one of the first sources to break the story.

Bradford’s departure comes just a couple of days after it was reported that redshirt-sophomore Marcus Major had been ruled ineligible for the fall semester because of academic reasons.