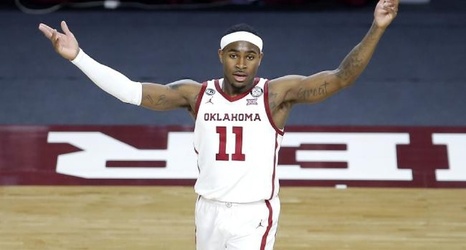 Watching his teammates dribble out the final seconds of the game, De’Vion Harmon waved his arms, then clapped his hands and belted out a celebratory whoop.

There was lots to celebrate.

On a day the Sooners scored a signature win, a boost to their NCAA Tournament resume and a confidence builder at the beginning of a brutal four-game stretch, Harmon was huge. He led the Sooners in scoring for the third straight game, playing efficient and smart basketball even with the side drama of high school buddy Jalen Wilson being in Jayhawk blue.