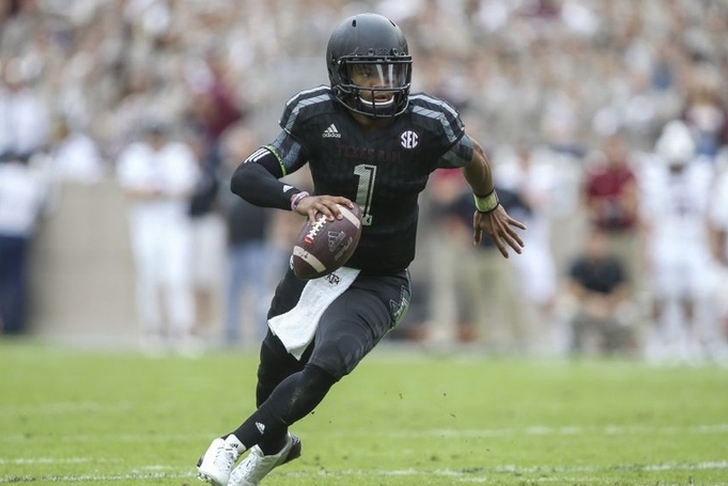 Released from his scholarship, Murray is eligible to transfer to any school not within the SEC or a team on Texas A&M Aggies schedule within the next four years. With these parameters in place, Murray would theoretically be able to choose from any of the three other finalists on his original recruiting wishlist -- Oregon, Oklahoma, and Texas. An original home-and-home deal between Oregon and Texas A&M for 2018 and 2019 fell through last year, which keeps Oregon on the list of potential destinations.

According to sources with knowledge of the situation in College Station (and a Texas Insiders post on 247Sports), Murray is currently mulling over Texas and Oklahoma as the two favorites for his next landing spot.

Adding fuel to the speculation of a potential move to Norman, Sooners head coach Bob Stoops followed the former five-star on Twitter just a few hours after he announced his decision to leave the Aggies. (He unfollowed Murray just a minute or so later).

It could very easily have been a mistake, but there's also an outside chance that Stoops was attempting to ping Murray. Regardless of this little bit of social media intrigue, it appears Murray's got both the Sooners and the Longhorns on his mind right now.

According to an ESPN report, "uncertainty with the direction of Texas A&M's offense, the future of the offensive coaching staff, trust issues between the quarterbacks and coaches and how the quarterbacks were utilized" were primary factors in Murray's decision to move on from the Aggies."

Oklahoma would appear to provide the stability that Murray's looking for, especially with the rise of QB Baker Mayfield during the program's run to the College Football Playoff this year.

As for Texas, they may a strong push for Murray before he signed on with the Aggies last year. There's no indication that he's cooled down on the Longhorns in the interim.

The #1 dual-threat quarterback in the Class of 2015, Murray played in eight games this season -- completing 59.5 percent of his passes for 686 yards, five touchdowns and seven interceptions.