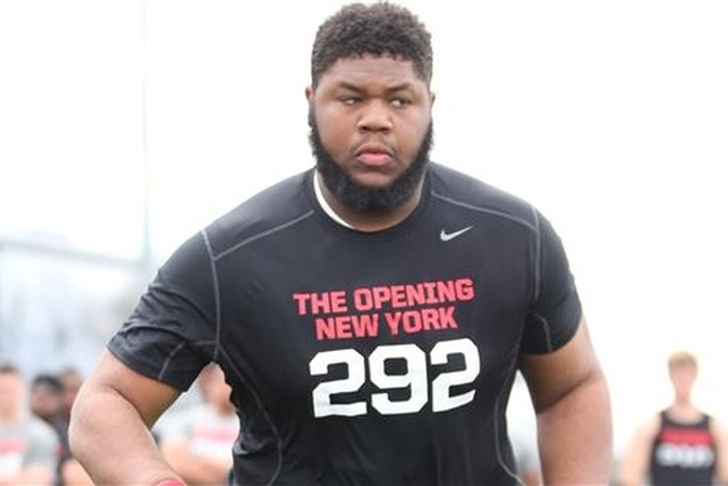 The Oklahoma Sooners already boast one of the top recruiting classes in the country, but they're far from done, making a strong push during the last month of recruiting as we heads towards National Signing Day on Wednesday, Feb. 3. Here's all the latest news and rumors you need to know:

“I have known for a while that I wanted to be a Sooner,” said Valentin, via 247sports. “I talked to a lot of coaches and I put all the pieces together and OU was a great fit for me. I was just looking at what I was going to be involved with at OU and it all just appeals to me. I know if I come in there early with the right attitude and if I am mentally and physical ready, and I am definitely going to be, then I am going to have a big part in what we are going to be doing next year.

“I am probably a guard at OU because they have two sophomore tackles. I can play anywhere along the offensive line and I played left guard this past year. My relationship with [offensive line coach Bill Bedenbaugh] is great and he seems like he is a genuine guy. He is very honest about what he is going to do with his unit at OU and that is important for me to be able to trust my position coach. Considering the business that we are in, that is very important that I have a coach that is just very honest with me. I know Coach B is sincere when he says he wants to help me to accomplish everything that I want in life and in football.”

Valentin picked Oklahoma over South Carolina, UCLA, and Temple, and says he's happy to have the recruiting process behind him.

“It feels really good to be an Oklahoma Sooner and I am very happy with my decision. I have been getting a lot of support from the OU fans on Twitter, and then going down there and meeting all the players. coaches and academic people is what really sold me on OU. I felt the players and coaching staff were great and I just felt OU was the best place where I could have a great college experience.”

Lewis Speaks Out On OU Transfer
Geno Lewis is the second Penn State wide receiver to transfer to Oklahoma in the past four years, and he couldn't be happier about the move to Norman or convinced that it was the right play for his senior season.

“I had a long talk with my family and I prayed about this decision and I just decided that OU was a great place to finish out my career,” said Lewis. “Basically my situation is that I appreciate everything that Penn State has done for me, but I just thought it was in the best interest for me to transfer to OU to start my graduate studies and get the most of my opportunities.”

With Sterling Shepard on his way out, Lewis has a ready-made spot for him in the wide receiving rotation.

“I gave my high school head coach (Patrick Keating) a heads up that after the season I was going to see how everything goes and I told him to stay alert because I might want to go somewhere else after the season,” said Lewis. “He told me that he was going to call a couple of schools, and one of the schools that he called was OU, and then after I got my release the process went from there.

“I really didn’t know anything about Oklahoma but my teammate at Penn State my freshman year, Justin Brown, was there and he took me under his wing when I first got to Penn State. He ended up going to Oklahoma and he did well there his last year. He was always a mentor for me, and I talked to him about the whole situation and he had nothing but great things to say about Oklahoma. With all the guys they have coming back and a great quarterback in Baker Mayfield and I just feel OU is a great team, and I look forward to being a part of it and getting some Big 12 wins.”

Sooners In Battle For Four-Star DL
Four-star defensive lineman Amani Bledsoe reportedly had a handful of schools still on his wishlist after a visit to Baylor on December 5th, with in-state Kansas still having a strong pull along with Oklahoma and Baylor.

However, according to 247Sports, it appears it's a one-against-one battle between Oklahoma and Baylor before Signing Day. If that's indeed the case, all signs point to OU landing one of their top targets and the #1 Kansas-based recruit in the Class of 2016