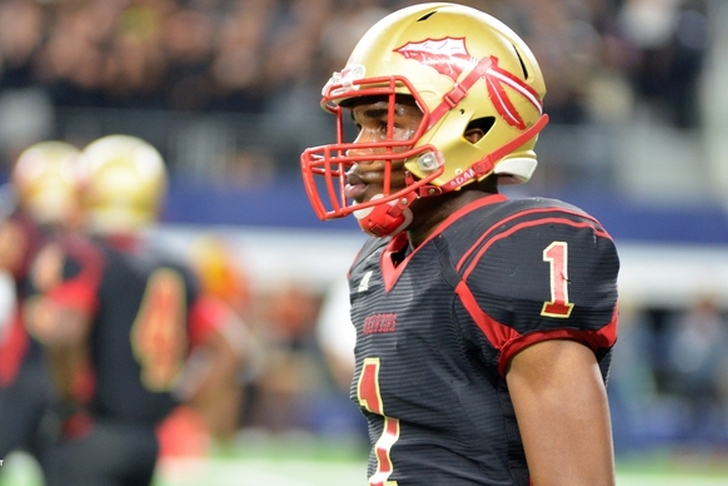 The college football season doesn't start for roughly two months, giving the Oklahoma Sooners plenty of time to focus on recruiting. Oklahoma has turned up the heat on the recruiting trail during the offseason, and it's already paid off with 15 commitments. But the Sooners are far from done. Here are the latest news and rumors surrounding Oklahoma football recruiting.

Sooners Pushing For Five-Star Safety
There isn't a better safety in the country than Jeffrey Okudah. Ohio State is the favorite for the No. 5 player in the country, but the Sooners are gaining ground.

"I'd say Oklahoma has a chance [to knock Ohio State off as favorite]," Okudah told 247sports. "It just feels like home, it's a winning program with a great tradition and it has a close proximity to where I live."

Okudah is from Texas and he'd be a major addition to the Sooners' 2017 class.

OU In Mix For Five-Star WR
Okudah isn't the only highly-touted recruit the Sooners are chasing. There's also Joseph Lewis, who told 247Sports that Sooners, Arizona, Nebraska and Oregon are recruiting him the hardest. Lewis is the No. 11 player in the country and the No. 2 WR. The California product is the four player in the state and the USC Trojans are the current favorites.

Sooners Land Four-Star CB
The Sooners are focused on the 2017 class, but they've also picked up a pledged from a four-star CB from the class of 2018. Jordon Austin announced he's committed to the Sooners on Twitter.

Austin is brother of current Sooner Dakota Austin. He's the second commit for the class of 2018.

Follow our Oklahoma Sooners team page for all the latest Oklahoma Football recruiting news or download the Chat Sports App!