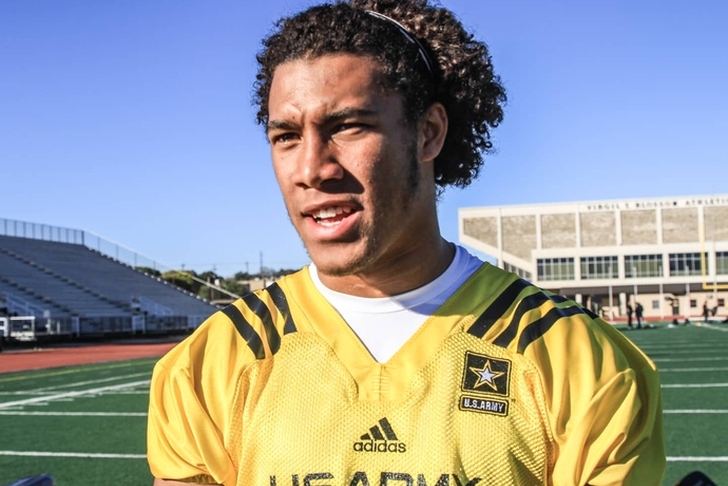 It's been a long and winding recruiting process for five-star Fresno (CA) Clovis West outside linebacker Caleb Kelly, as he's entertained a host of overtures and offers from top programs. However, the battle for his pledge ultimately came down to the Oklahoma Sooners and Notre Dame Fighting Irish -- a battle won by Oklahoma with Kelly's commitment announcement on Wednesday night.

Kelly is a prototypical blue-chipper. He ranks as the #3 outside linebacker, #25 overall prospect and #5 recruit in the State of California, and he possesses a college-ready frame and skill set which could position him as an impact player in his true freshman year.

Michigan had an early beat on Kelly, with most projections a few months ago pointing to the Wolverines as the favorites. However, the Wolverines dropped off the pace down the stretch -- giving both Oklahoma and Notre Dame room to muscle in. Oklahoma has reportedly led for months now, but Notre Dame closed the gap in a big way over the past few weeks.

However, OU ended up squeaking out a commitment in what was a back-and-forth battle between ND and Oklahoma up until the final hours. Oregon was also in the mix, but they appear to have finished a distant third.

The final five-star to commit on one of the wildest National Signing Days in recent memory, Kelly gives Oklahoma its first and only five-star pickup of the cycle. It's also a huge get for Oklahoma considering a lack of luck with a list of top-target defensive recruits in 2016.

Let's take a closer look at Kelly with this impressive highlight reel, courtesy of MaxPreps: