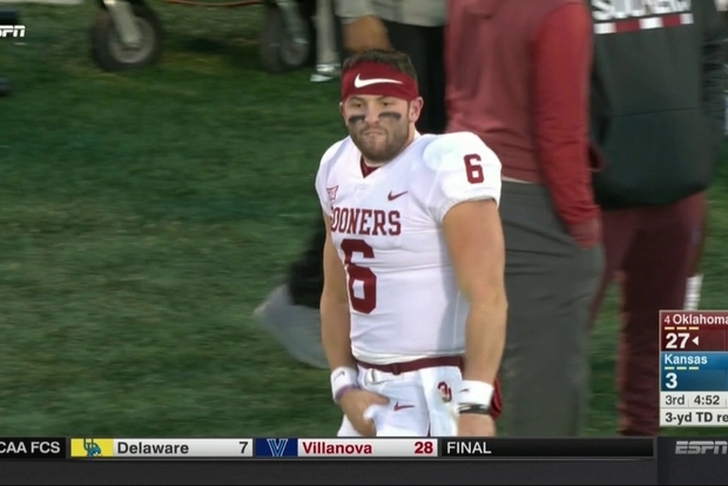 The Oklahoma Sooners are punishing QB Baker Mayfield for his behavior towards Kansas. Head coach Lincoln Riley said Mayfield won't start against the West Virginia Mountaineers, but he will play in the game.

Head coach Lincoln Riley announces that QB Baker Mayfield will not start Saturday's game against West Virginia, but will play and he will not be a team captain for the contest.

Here's the video of Mayfield's actions towards Kansas, including cussing them out and grabbing his crotch. This came after Kansas players refused to shake Mayfield's hand and Mayfield took a cheap shot after a pass.

This is his Heisman Moment RT @StrikaNation24_: Let's just say Baker Mayfield is fed up with Kansas' BS  pic.twitter.com/PYSHDBhcR3

Mayfield is the current Heisman front-runner and has the Sooners in position to make the College Football Playoff. With Mayfield out, Kyler Murray will start. Murray, a transfer from Texas A&M, has played sparingly this year. He's completed 16 of 19 passes for 307 yards, 2 TDs and no picks. He's also a dangerous runner, averaging 6.2 yards per carry this year.

Check out our Oklahoma Sooners team page for all the latest on Oklahoma Football or download the Chat Sports App!